Mogadishu, 27 May 2019 – The Special Representative of the Chairperson of the African Union Commission (SRCC) for Somalia, Ambassador Francisco Madeira yesterday met civil society actors to discuss areas of collaboration with AMISOM.

The meeting which took place at the AMISOM Mission headquarters in Mogadishu was also attended by senior AMISOM officials including the Head of Mission Support, Maj. Gen. Fidza Dludlu.

The AMISOM civilian component also carries out programmes that include the protection of women, children, and vulnerable groups as well as the promotion of human rights and gender issues.

Ambassador Madeira told the civil society actors that AMISOM was not in Somalia to substitute the Somalia government; but to restore peace, stability and empower Somalis to take over security responsibility from AMISOM.

The leader of the civil society delegation, Osman Moallim, commended AMISOM for the strategic support to the Federal Government of Somalia and the federal member states to advance peace and security.

He also asked AMISOM to tap into the local knowledge and expertise of civil society organisations under SONSA to reach local communities.

“It is important for us to collaborate with AMISOM through sharing information to enable AMISOM to achieve its mandate and coordinate efforts to maintain peace and stability,” Osman added. 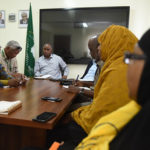 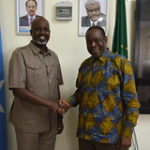 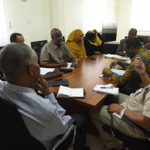