On 21 July 2019. Representatives from SONSA Platform and other key civil society members held a meeting with Delegate from African Union High-level Implementation Panel led by former South African President, Thabo Mbeki, delegate from IGAD and the United Nation envoy to Somalia. The AU Delegate came into the country to have high-level talks with the Government Leaders and the Civil Society on pursuing the objectives of regional integration in the Horn of Africa.

The civil society concern on the horn of Africa regional integration is due to the fragility of the country , the lack of political consensus among Somali Leadership, lack of public institutions established with participation of communities.  On the conclusion, the delegate and CSO members seen necessary having collaborative coordination between Somali Government Institutions and the Civil Society to face the key issues forming the social, economic and political systems of the country as well as the regional and international level. 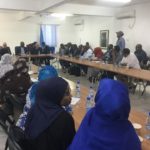 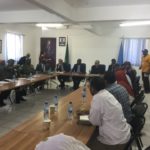