July, 8, 2019:  representatives from Somalia non state actors (SONSA) attended one day discussion and consultative workshop  meeting  to review the draft Somali Passport Act, organized by the Immigration and Naturalization Directorate and was held at Afrik Hotel , Mogadishu , Somalia. The workshop also attended by representatives from federal government and state institutions.

The main objective of the consultative workshop was to have discussions and consultations among  government institutions at federal and state level and civil society  on the first draft of the Somali Passport bill prepared by the Immigration and Naturalization Directorate of Somalia. The directorate worked on the Somali’s Passport act, released by the central government of Somalia on 1970 and developed a draft bill. The 1970 act was 10 articles while the new draft bill is 19 articles.

After fruitful discussions and consultations, the participants presented their viewpoints and suggestions on the draft Somalia’s passport bill prepared by the directorate. SONSA members attended the workshop meeting actively participated in all discussions by representing the viewpoints of Somalia’s non-state actors. 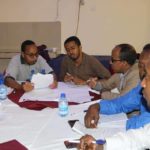